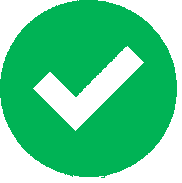 EE's free Apple Music data offer: is it a benefit actually worth joining for?

We review the ins and outs of the 6-month free Apple Music subscription and data offer on EE to see whether it's worth joining the network just to get it. SIM Sherpa is your trusty guide. Last updated: 9th January 2018.

In our free Apple Music guide

A quick summary of what Apple Music actually is... 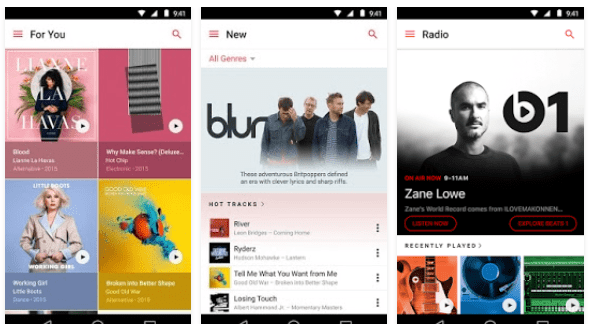 Apple are well known for their music purchasing service iTunes but Apple Music possibly less so.

It’s basically a streaming service that lets you listen to your choice of music files on your mobile, without ever having to purchase them outright. It’s very much like Spotify and similar apps.

Apple Music offers up a library of over 40 million songs, ready to stream instantly over EE’s superfast 4G network with no ads. It also works alongside any music you may already have on an iTunes account.

At our most recent check (8th Jan 2018), Apple Music costs £9.99 per month on an individual plan, so getting it free for 6 months from EE does have real value.

✔ For 6 months, the streaming data is free tooSee full offer

The 6 months free Apple Music offer from EE is now effectively made up of two parts:

First you’ll get a free subscription to the Apple Music streaming service, which would normally cost £9.99 a month. For the first 6 months after you add it, this will cost nothing. Afterwards it’ll be added to your bill.

The second part has been added more recently. The data you use for streaming Apple Music via the app on your phone won’t come out of your monthly allowance. It’s basically unlimited data for just that service.

The free data also lasts for 6 months, after which, all data you use for streaming Apple Music will come out of your regular monthly allowance.

Join EE on either of these products to qualify

It's easy to claim: even if you're an existing customer 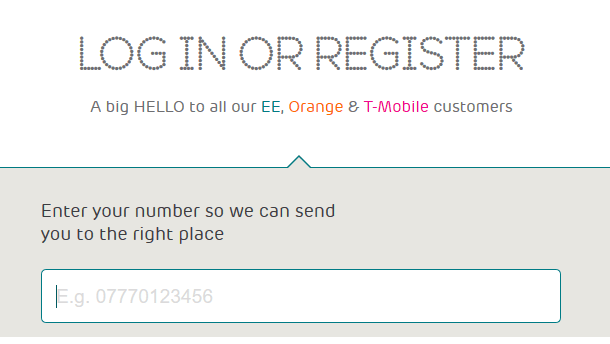 ✔ You don't have to add Apple Music immediatelyRead full instructions

One of the nicest bits about EE’s Apple Music offer is that you don’t have to sign up for it immediately. If you decide you don’t want it from the moment you order and join EE, that’s fine. You can add it later.

To start your free subscription from when you order, choose a pay monthly SIM only plan or phone contract from EE.co.uk. In the checkout, you’ll see an option to add Apple Music in the Choose Your Extras section.

If you’re an existing customer or don’t want to add Apple Music to your order immediately, you can add it to your account at any time (as long as the offer’s still running) by following the instructions here.

Also even if you’ve already had the free subscription, you can still get the 6 months free data separately.

Similar schemes out there 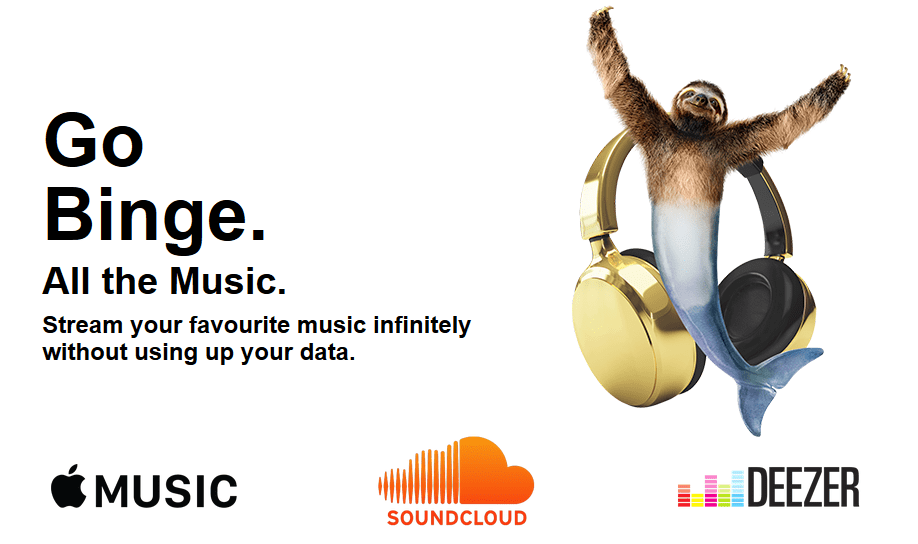 On Three’s Advanced pay monthly plans with 4GB data or more, you now get their Go Binge service included with smartphone contracts and SIM only deals.

It lets you stream these selected services as much as you like free of charge, without using up any of your regular allowance of mobile data.

One of those included services is now Apple Music. And because Go Binge lasts for the entire length of your contract, you’re not limited to just 6 months of free streaming data like you are with EE’s scheme.

But it’s worth noting that unlike EE, Three do not include the cost of the Apple Music subscription itself. So you’ll have to go buy that separately from Apple directly.

Useful link: See everything you get on Three's Go Binge scheme

Don't rule out Vodafone if you're interested in included entertainment subscriptions 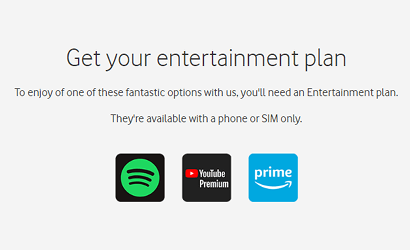 Even though EE have now been offering a 6-month subscription to Apple Music since 2016, getting an entertainment subscription including with your mobile deal isn’t a new idea:

Vodafone have been doing this for a long while. Their Red Entertainment bundles with phone contracts or SIM only let you add one subscription from three choices and pay no extra that the plan’s regular cost.

You can’t get Apple Music included with a Vodafone deal but you can choose Spotify Premium, which is another similar music streaming service (or a NOW TV Entertainment Pass or Sky Sports Mobile TV.

These do only come on Vodafone’s more-expensive plans (on EE you get Apple Music on all pay monthly ones) but at least Vodafone’s subscriptions don’t only have a 6-month limit like EE’s does. 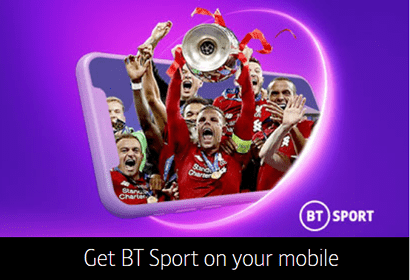 ✔ Watch live sport covered by BT on your phoneHow it works

It’s not Apple Music or even another audio streaming service but we thought it was also worth mentioning BT Mobile, who have a similar free subscription offer but for a different type of entertainment:

Sign up on either a pay monthly phone contract or a SIM only deal with over 6GB data and you’ll get free access to the BT Sport App that lets you watch coverage from BT Sport channels on your mobile phone.

This compares favourably against EE, as you get the subscription free for the length of your contract, instead of being time-limited to 6 months.

Useful link: How to get BT Sport app with BT Mobile

What we like about EE’s free Apple Music offer 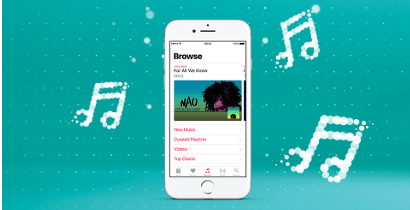 ✔ Apple Music works on Android and iOS phonesHow to use app

It’s a genuine freebie. Apple Music normally costs £9.99 a month, so getting it free for 6 months is a bonus, even if you can sometimes get a 3-month free trial via Apple direct anyway.

Having the streaming data free could save you on other charges for going over your limit or let you pick a smaller, cheaper plan in the first place because you don’t need so much data.

It’s a nice touch that even existing customers can get the offer and that new customers don’t have to cash it in immediately. The more flexible an offer, the better in our book.

We also like that it’s a benefit on top of all other EE’s advantages: fastest 4G speeds, best UK coverage and at least 3 months of free BT Sport app access. You don’t have to give up any of those to get the offer.

Useful link: How you use Apple Music with EE 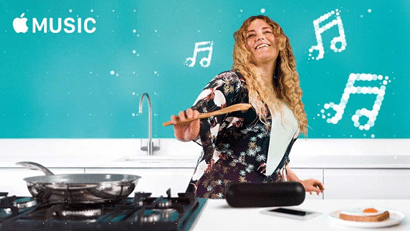 ✔ She might not be so happy paying £9.99 a monthHow to cancel

The 6-month offer length is a weakness. It’s almost giving with one hand and taking with the other.

That’s because if you continue using Apple Music after 6 months, you’ll be charged £9.99 a month going forward. We’re generally sceptical of ‘free’ things that rope you into pay more later.

It’s also worth noting that we’ve seen Apple give away 3 months Apple Music free anyway. So EE are only adding an extra 3 months to what you could already have had for no cost.

Also imagine you get heavily into streaming your Apple Music because the data’s free, you could get a shock after 6 months when the data starts coming out of your allowance.

You could see it as EE training people up to use lots of data, which they can then charge you for later.

Useful link: How to cancel Apple Music after 6 months

Overall rating: a handy reward if you were thinking of joining EE anyway 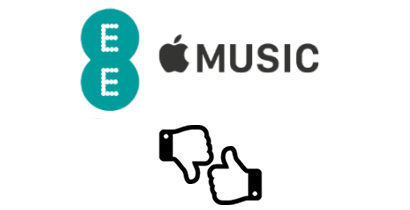 On balance, we’d say that the free Apple Music subscription for 6 months is a nice added extra if you were going to join EE anyway for their leading 4G speeds and coverage.

Realistically the value of it is 3x months at £9.99 = £29.97 when you consider you can get 3 months free from Apple anyway as a trial, so it’s not a world beater in terms of money saved but handy nonetheless.

The biggest value is probably in not paying for the data the app uses in the first 6 months. But as we point out above, Three offer free data for Apple Music too and it lasts the length of your contract.

If the 6-month time limit was removed, we’d be a bit more enthusiastic. But until then, we’d say the offer is a nice move from EE but shouldn’t be the be all and end all when choosing your next mobile provider.

Order either of these to get 6 months free Apple Music...

Our other EE articles